How to build rail stations

In other games you can build stations like in the picture below. That does not work with Simutrans. If you use two-way signals near stations you will increase the risk of traffic jams. In the picture the incoming train blocks the departing train.

You can avoid this by using pre-signals: 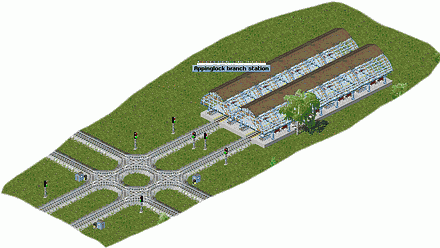 A train only crosses a pre-signal if the pre-signal and the following signal are green. This means that in the example no train enters the block in front of the station if there is a train on the destination platform. Because of this no incoming train will block departing trains.

Every train has an own track

More than one train can be served at once

needs of a lot of space

This station type is similar to the previous example. The difference is, that more than one train shares a platform. Please note, that there is no signal in front of the station.

No jams which wouldn't dissolve

Only one train can be served at once

This station can handle two trains at one time (one at the platform, one in the area behind the station).
If a third train enters the station, there will be a very large traffic jam (which does not dissolve for a very long time).

Only one train can be served at a time

Risk of jams if you use to many trains

station on side track

This platform is on a side track (the left rail). Trains that do not stop should use the right rail.