How to use trains and signals

Search a producer and consumer 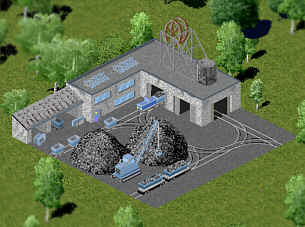 Click with the mouse on the coal mine image to open the industry-information window. In this window you will see the customers of the coal mine.

Image: Consumers of a coal mine

In the above example you see, that a Power station is at the coordinate "125, 216" accept goods from the selected coal mine.

You see the current coordinate of the mouse pointer at the bottom of the screen (i.e.

).
It is possible to zoom the map with the Page-Up and Page-Down keys. This can help you while searching a customer.

Build a railway and stations


If you have found a coal mine and a consumer which accepts the goods of the coal mine, you can connect both with a railway.
You can build rails very similar to streets. Please take a look at the truck tutorial for more information.
You can build a station only on existing rails. Before you build a station you have to lay out the rails like in the following image

Image: You can place a station on this rails

On the above rails you can build a station like the following.

The station can be 1-2 tiles away from the power station.

If you want to use electric engines you have to electrify the track with 'electrify track' button.

Before you can buy a train you have to build a depot. You can build a train depot on the end of a rail.
The following image shows you a good way to connect a depot with a railroad system. If you build the marked signal a train could leave the depot, even if an other train is waiting on the other rail.

The signal in front of the depot should be further away from the depot than the longest vehicle you intending to buy.

If you would like to use more than one train on a rail, you have to place signals.

Please take a look at the signals article.

Click on the train depot image to open the depot window.

You can buy electric and steam engines in the depot. Electric engines can only drive on tracks with overhead lines! In the rail-tools menu you can find a tool to add overhead-lines to rails.

The above engine has high running costs (3.36 C/km). It should only be used on very profitalbe routes.
The top speed of the engine is 200 km/h. Some wagons can slow down a train with the engine. As example the following wagon will slow the train from 200 km/h to 120 km/h.

In the industry information window you can see which goods are produced by an industry. As example a coal mine produce coal. Coal is an bulk good.

There are some wagons which can transport bulk goods like coal. They differ in price, capacity and top speed.

It does not make sense to combine a fast engine with wagons which have a lower top speed. As example you should not combine the following wagon with an engine which is faster than 120 km/h.

You can schedule the train which is displayed in the top-left hand corner of the depot window by clicking on the Schedule-Button.

Image: Schedule of a vehicle